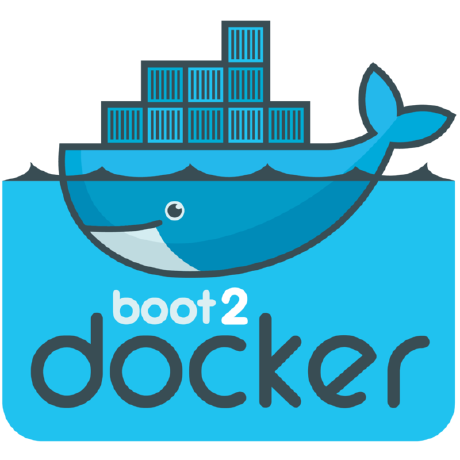 Boot2Docker is a lightweight Linux distribution made specifically to run Docker containers. It runs completely from RAM, is a small ~38MB download and boots in ~5s (YMMV).

Boot2Docker is currently designed and tuned for development. Using it for any kind of production workloads at this time is highly discouraged.

Installation should be performed via Docker Toolbox which installs Docker Machine, the Boot2Docker VM, and other necessary tools.

The ISO can be downloaded here.

Boot2Docker is used via Docker Machine (installed as part of Docker Toolbox) which leverages VirtualBox's VBoxManage to initialise, start, stop and delete the VM right from the command line.

Migrate from boot2docker to Docker Machine

If you were using the boot2docker management tool previously, you have a pre-existing Docker boot2docker-vm VM on your local system. To allow Docker Machine to manage this older VM, you must migrate it, see Docker Machine documentation for details.

The bootup script output is logged to /boot.log, so you can see (and potentially debug) what happens. Note that this is not persistent between boots because we're logging from before the persistence partition is mounted (and it may not exist at all).

If you need to customize the options used to start the Docker daemon, you can do so by adding entries to the /var/lib/boot2docker/profile file on the persistent partition inside the Boot2Docker virtual machine. Then restart the daemon.

The following example will enable core dumps inside containers, but you can specify any other options you may need.

Boot2Docker is essentially a remote Docker engine with a read only filesystem (other than Docker images, containers and volumes). The most scalable and portable way to share disk space between your local desktop and a Docker container is by creating a volume container and then sharing that to where it's needed.

One well tested approach is to use a file sharing container like svendowideit/samba:

Or on Windows, use Explorer to Connect to:

You can then use your data container from any container you like:

You will find the "data" volume mounted as "/data" in that container. Note that "my-data" is the name of volume container, this is shared via the "network" by the "samba" container that refers to it by name. So, in this example, if you were on OS-X you now have /Volumes/data and /data in container being shared. You can change the paths as needed.

The first of the following share names that exists (if any) will be automatically mounted at the location specified:

If some other path or share is desired, it can be mounted at run time by doing something like:

It is also important to note that in the future, the plan is to have any share which is created in VirtualBox with the "automount" flag turned on be mounted during boot at the directory of the share name (ie, a share named home/jsmith would be automounted at /home/jsmith).

In case it isn't already clear, the Linux host support here is currently hazy. You can share your /home or /home/jsmith directory as Users or one of the other supported automount locations listed above, but note that you will then need to manually convert your docker run -v /home/...:... bind-mount host paths accordingly (ie, docker run -v /Users/...:...). As noted in the previous paragraph however, this is likely to change in the future as soon as a more suitable/scalable solution is found and implemented.

As discussed in the Docker Engine documentation certificates should be placed at /etc/docker/certs.d/hostname/ca.crt where hostname is your Registry server's hostname.

Alternatively the older Boot2Docker method can be used and you can add your Registry server's public certificate (in .pem or .crt format) into the /var/lib/boot2docker/certs/ directory, and Boot2Docker will automatically load it from the persistence partition at boot.

You may need to add several certificates (as separate .pem or .crt files) to this directory, depending on the CA signing chain used for your certificate.

As of Docker version 1.3.1, if your registry doesn't support HTTPS, you must add it as an insecure registry.

then you should be able to do a docker push/pull.

So sometimes if you are behind a VPN, you'll get an i/o timeout error. The current work around is to forward the port in the boot2docker-vm.

That means you have to forward port 2376, which can be done like so:

Docker Machine auto logs in using the generated SSH key, but if you want to SSH into the machine manually (or you're not using a Docker Machine managed VM), the credentials are:

Boot2docker uses Tiny Core Linux, which runs from RAM and so does not persist filesystem changes by default.

When you run docker-machine, the tool auto-creates a disk that will be automounted and used to persist your docker data in /var/lib/docker and /var/lib/boot2docker. This virtual disk will be removed when you run docker-machine delete default. It will also persist the SSH keys of the machine. Changes outside of these directories will be lost after powering down or restarting the VM - to make permanent modifications see the FAQ.

If you are not using the Docker Machine management tool, you can create an ext4 or btrfs formatted partition with the label boot2docker-data (mkfs.ext4 -L boot2docker-data /dev/sdX5) to your VM or host, and Boot2Docker will automount it on /mnt/sdX and then softlink /mnt/sdX/var/lib/docker to /var/lib/docker.

Install on any device

To 'install' the ISO onto an SD card, USB-Stick or even empty hard disk, you can use dd if=boot2docker.iso of=/dev/sdX. This will create the small boot partition, and install an MBR.

Build your own Boot2Docker ISO

Goto How to build for Documentation on how to build your own Boot2Docker ISOs.

See the workarounds doc for solutions to known issues.